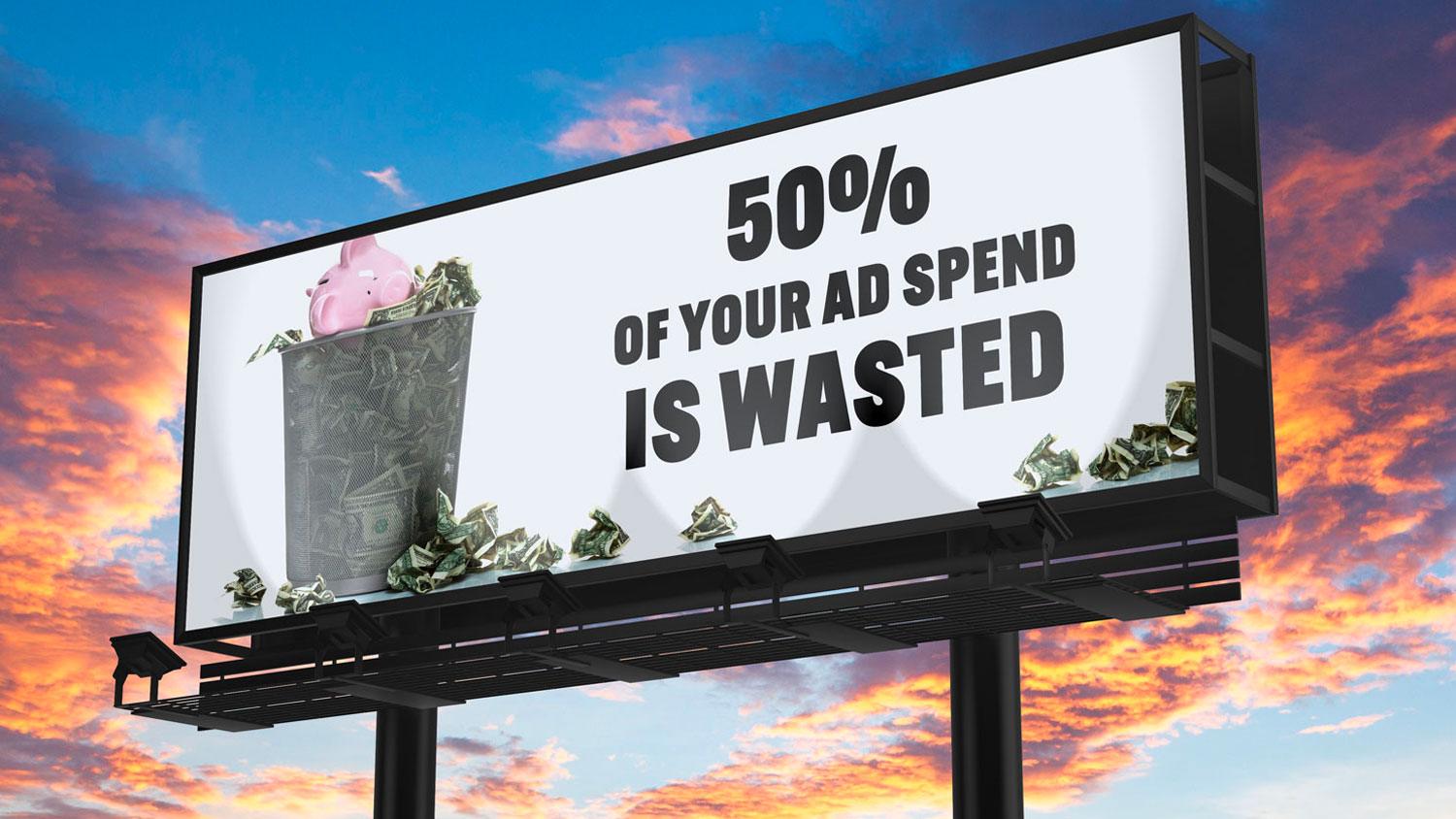 50% of Your Advertising Budget is Wasted (And What You Can Do About It!) 

“Half the money I spend on advertising is wasted; the trouble is, I don’t know which half.” – John Wanamaker

Over 100 years ago, John Wanamaker, a pioneer in the field of marketing, opined that half of his advertising budget was most likely wasted.

John knew that to get his messages in front of his intended audience, he was also paying for his advertising to appear before many who wouldn’t care.

But how could he really know which marketing type was working the best?

Indeed, this is the two-headed conundrum marketers still face: How do we make sure our marketing dollars are spent on those who are ready to receive our message, and how do we prevent wasting money on putting our marketing in front of those who don’t?

In his time, John Wanamaker only had to worry about what’s now part of traditional advertising: print ads, billboards, and (after his time) radio and television ads.

But now we have the internet and all its new vistas and vantage points for advertising: Digital advertising.

It prompts the question: Which is better, traditional or digital? And that instantly creates a follow-up question: Which type of advertising has the most wasted dollars?

Let’s explore these questions, traditional and digital media in general, and what you can do to get the most bang for your advertising buck.

The world spent $278.5 billion in traditional advertising in 2021. Newspapers, magazine, TV, radio, and OOH (out-of-home marketing, like billboards and other large signs) dominated our physical world with brand recognition and calls to all sorts of actions.

And is the proverbial 50% of advertising spent on traditional marketing really wasted? Well, it may not be 50% across the board, but it is a lot. Let’s look at television advertising as an example.

After conducting a study of other studies on the ROI of TV advertising, Dr. Anna Tuchman (Associate Professor of Marketing at Kellogg School of Management) and her colleagues found that the median brand has an ad elasticity of around 0.01. The long and short of that means, if a brand increases its TV advertising by 100%, they will only see a 1% boost in sales. For some, that expenditure might make sense for that small boost in profits.

And not to pick on TV advertising too much, but a study by GroupM just reported in The Wall Street Journal shows that due to a weird quirk in how our streaming devices talk to our TVs, about 17% of ads play when the television is off. That is an advertising waste of over $1 billion.

Digital marketing is as dynamic as the internet itself, and more targeted than traditional media. The paid search campaigns that deliver ads to consumers based on their searches. Paid social seeks to deliver relevant ads to those checking their social media feeds. And programmatic ads that let marketers be highly targeted yet are primarily used for brand awareness. These are some of the main digital tools at our disposal.

It comes as no surprise, then, that many companies are making literal fortunes off the digital marketing business. According to another report by GroupM, 53% of all advertising revenue in 2021—totaling $408 billion—was made by just 5 companies: Google, Meta, Alibaba, ByteDance, and Amazon.

And for those who don’t buy ads directly from the publishers, but rather go through an adtech company for their programmatic buys, there’s a new dimension in advertising waste. As Forbes summarized, three separate studies have found John Wanamaker’s wasted 50% in the digital world: adtech middlemen. About half of every dollar spent goes to this bump in the digital advertising road.

There’s another hurdle to digital advertising that traditional marketing doesn’t have to deal with: bots. No longer the dumb, repetitive programs of the past, bots are now able to imitate human behavior and exist on actual user devices. Indeed, bots and botnets are expected to cost digital advertisers around $100 billion in 2023.

It’s clear, then, that both traditional and digital marketing have big issues with waste. Which leads us to the two questions posed before this section. First, which is better, traditional or digital marketing? Second, which type of advertising has the most wasted dollars? And to this we add a third question: what can you do to make sure your marketing dollars aren’t wasted?

“What advertising wants to do is engage with people where they’re spending their time.” – Keith Weed, Former CMCO Unilever

The very first thing you need to do to ensure your marketing dollars are well spent is to determine where your audience is. Because, like that Keith Weed says, you want your advertising to appear where the right eyes will see it.

Also, you need to determine the overall goal for your marketing. Is your aim to blanket the masses with brand awareness? Or are you looking for more specific audiences to convert into leads and, hopefully, customers?

Figuring out where your audience is and what your goals are will give you a roadmap for your marketing strategy. At AdsIntelligence, we excel at helping our clients find the best places to capture the attention of the best audience to achieve their goals.

For some, it might be a traditional billboard on the way to the beach for a beach-front community to get more brand recognition: “Imagine always being on vacation.” For others, it will be a full-scale digital campaign to generate high-quality leads to turn into customers. For still others, it’s a delicate and expertly calculated blend of both.

To quote John Wanamaker once again, “Nothing comes merely by thinking about it.” We take this to heart by being intimately involved with and hands on every marketing effort, especially with our digital marketing techniques. This allows us to actively analyze how the marketing is performing and dynamically adjust our strategy to better achieve our goals—all while minimizing any wasteful spends.

This level of care helps focus our efforts on true conversions, such as form submissions and phone calls from interested humans (and not human-like bots). We also communicate with our clients during the entire process, so they know what is working, what isn’t, and what we’re doing to maximize their marketing spend.

It’s this human touch, this ever-analyzing focus, that lets us offer our clients something special: the combination of old-school service with cutting-edge strategy. At AdsIntelligence, we add intelligence to every client’s marketing, be it digital, traditional, or a combination of both. There are no silver bullets to success, but we make sure our clients have the best shot.